Welcome to our ultimate guide of 275 perfect Husky names.

Have you decided that you are going to be the proud new owner of a Husky? Or are you considering the Husky breed as the next member of the family?

These sled dogs deserve a unique name to match their quirky personality.

We have a huge selection of over 275 hilarious and funny names to suit a range of temperaments, so you can get ready to own your very own snow baby. 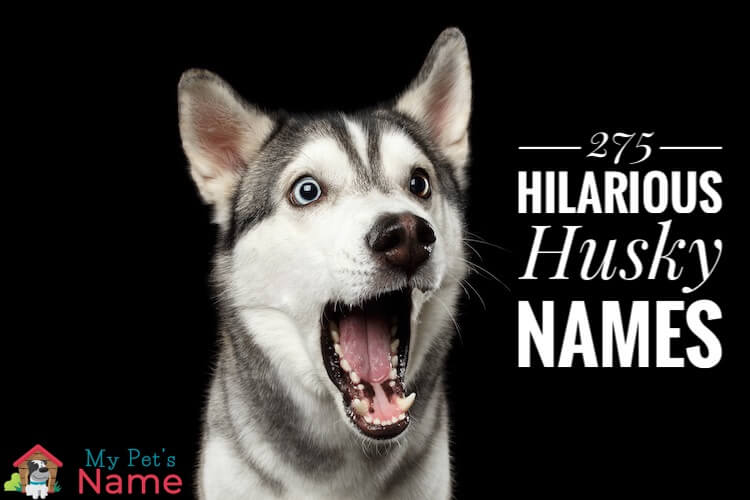 There are many ways of taking inspiration for Husky dog names. Did you know that Huskies were originally used as sled dogs?

So why not draw on their speed and agility for naming inspiration and choose a name like Hurricane?

Huskies were brought over to America in the early 20th century so a name that matches the Alaskan climate or Inuit language would be perfect for your snowy Husky baby! Or perhaps a name like Smokey to match the color of the breed?

Arrluk
The Inuit name for killer whale, this is a quirky choice that certainly shows everyone who is boss 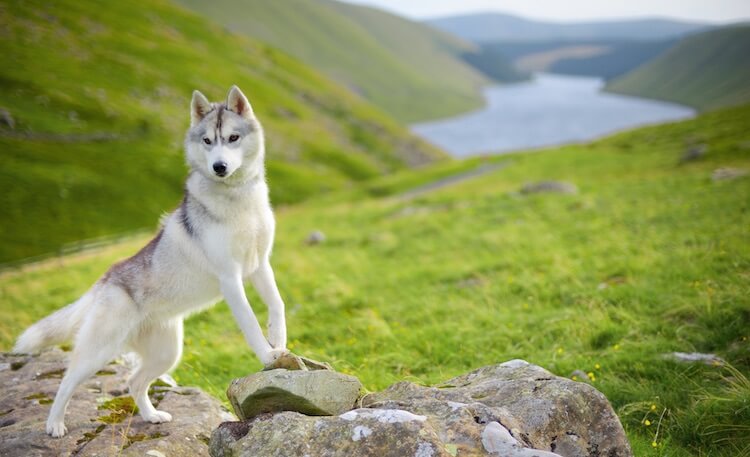 Are you struggling to find a name that suits your free spirited and independent female husky?

How about naming your female snow dog after strong and powerful women from history like Cleopatra?

Or instead how about drawing inspiration from the snowy regions that Huskies originally called home?

See below for our favorite female Husky names influenced from women throughout history and mythology.

Angel
Like ‘snow angel’, this name makes a sweet and spiritual name, excellent for a snowy white puppy 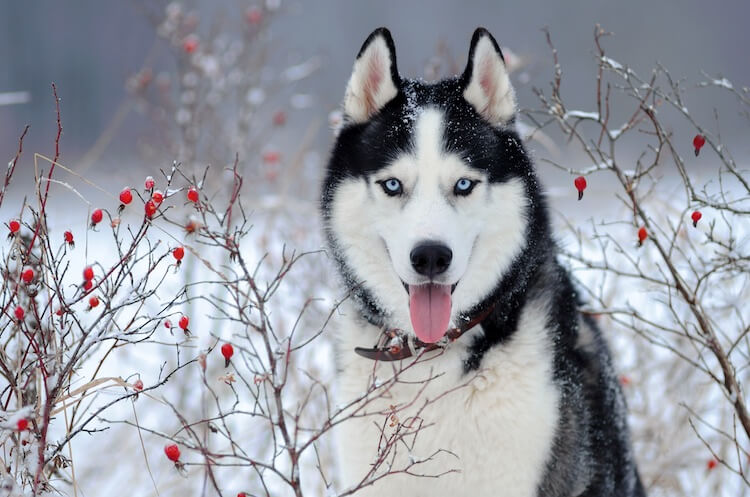 Male Husky dogs are good natured and athletic pups, and so need a name that suits their energetic and boisterous personality.

Here is our list of powerful male names for your new adorable best friend that will match his strong-minded behavior.

A powerful name such as Caesar or Everest will show everyone just how special your Husky puppy is, or how about Fang after Hagrid’s dog in Harry Potter?

Rasputin
This would be our top pick for a male Husky, a historical Russian name which would give your dog a mysterious and wise edge 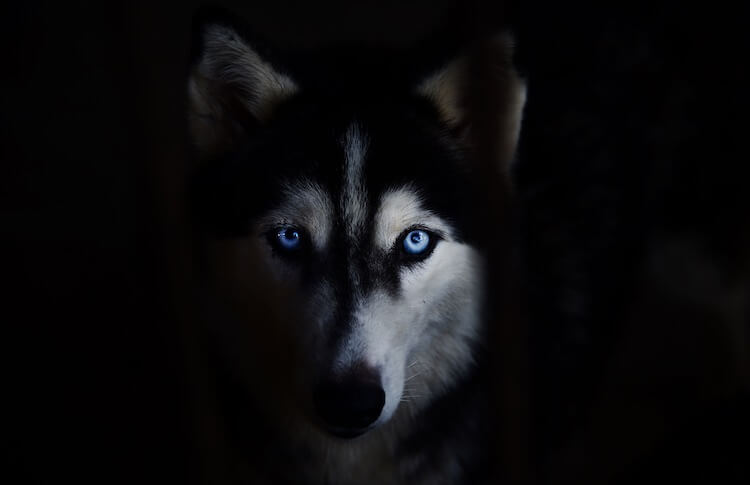 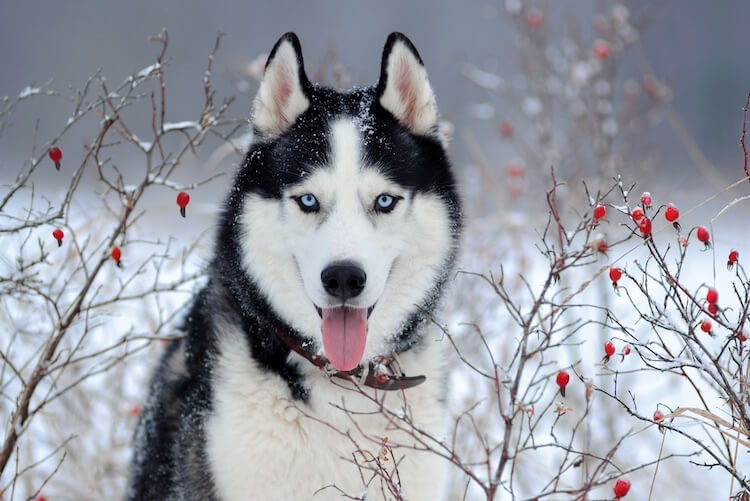 Siberian Huskies originate in Siberia, and were originally used for pulling sleds, guarding and as companions.

Due to their Russian origins, perhaps a Russian name would be perfect to suit these canines?

Finding the perfect moniker which suits your Siberian Husky in every way is very important.

Make sure your favorite choices sound good and have a great meaning behind them. A great meaning will showcase their strength, bravery, protectiveness, and beauty! 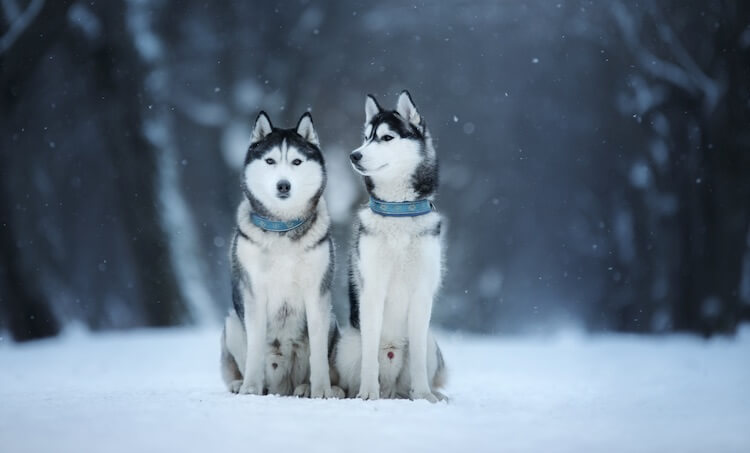 Male Siberian Huskies are renowned for their power and noble presence, therefore a cute and soft name just wouldn’t suit them!

We have put together Siberian Husky names based on some of the most noble men to have ever lived.

From characters in heroic films to famous rulers from the past – we have added some names that shout out ‘majestic’, such as names meaning ‘noble’ and ‘king’.

We hope there’s a Husky name in the list below that suits your Herculean Siberian dog and brings out their bold and powerful side.

Forkbeard
after ‘Sven Forkbeard’, the famous and powerful Viking ruler. 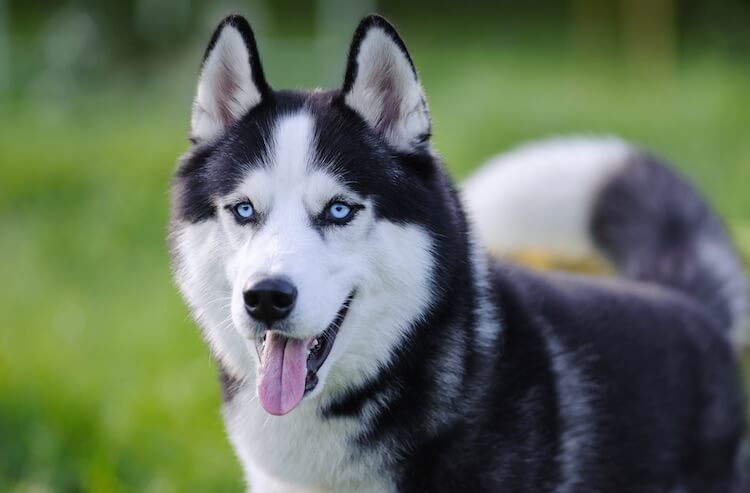 Female Huskies are no different than their male counterparts and make majestic and wonderful pets.

They deserve an equally powerful namesake to match!

Our suggestions for female Siberian Husky names are inspired by some of the most inspirational and bold women to ever have lived, from philanthropists to rulers, and women who have changed the world.

If these monikers don’t do justice to the majesty of female Huskies then which names will?

We hope you agree, check them out below…

Ephron
the surname of journalist, writer and director ‘Nora Ephron’, who challenged gender inequality in her world of work.

The best options are undoubtedly the most popular, as there must be a good reason why so many Husky owners love these names!

Each of these choices bring out the best aspects of Siberian Huskies:

Whatever type of dog you have, we hope these brilliant and popular choices offer what you are looking for!

Alpha
a bold Greek name meaning ‘leader’, which is perfect for a Husky who loves to take charge! 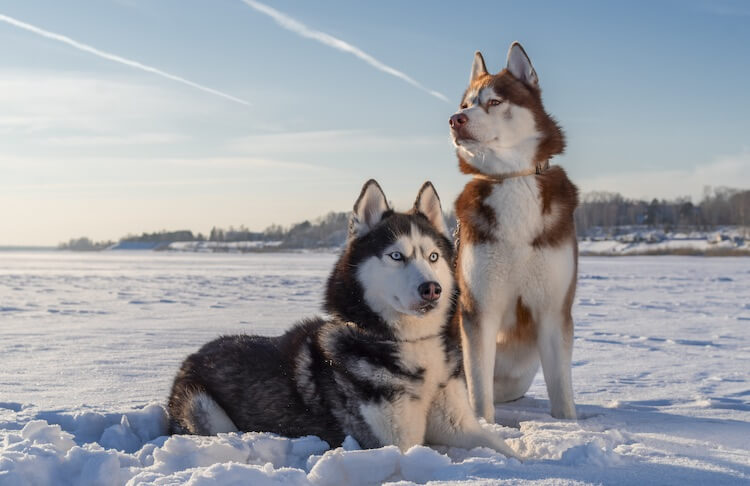 If you are lucky enough to own a beautiful white Husky, you will definitely be looking for an equally gorgeous name to show off their beautiful coat.

Names meaning white, or words inspired by white objects can suit all different types of Huskies.

If you think you have found a beautiful choice for your white pooch, make sure it still suits their personality, as well as their coloring. 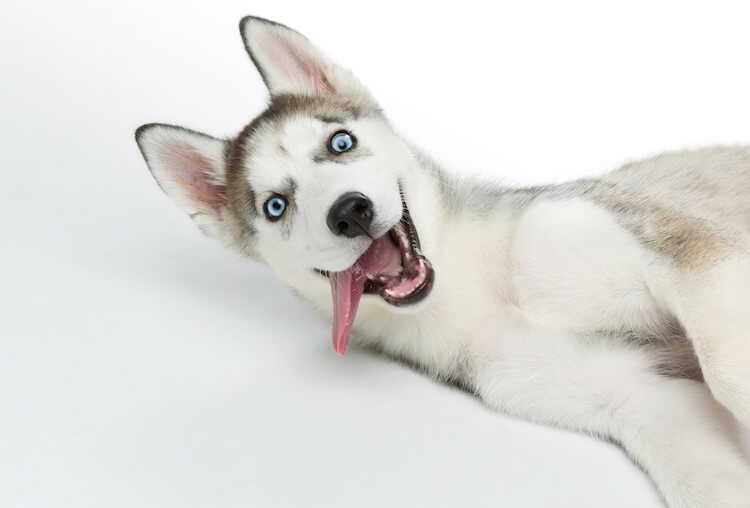 The best way to start looking for good Husky names is by finding a name that matches the unique personality of this beautiful breed.

Huskies are energetic and playful, so how about selecting a name like Dash to reflect just how fun raising these puppies can be?

These pooches are sociable canines who are loving and gentle, so see below for a list of adorable names that are perfect choices for your Husky.

Igloo
How sweet is this eskimo style name 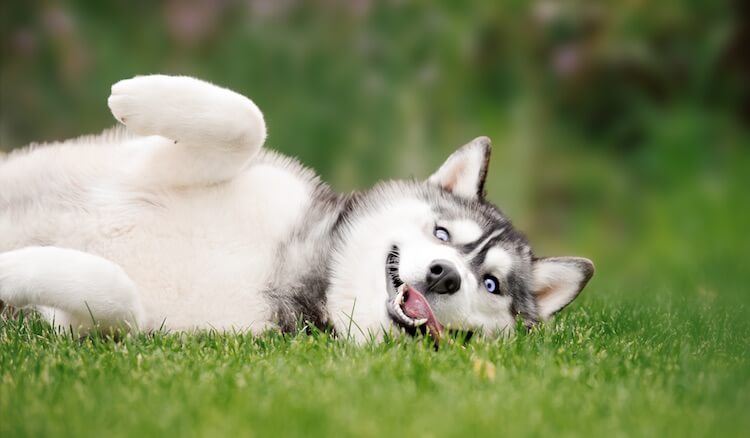 If there is one word to describe your new Husky puppy, it would definitely be cute.

I mean, have you seen that soft little nose and those perky ears?

There are several cute Husky names for you to choose from, from short and snappy sounding names to gorgeously precious ones. 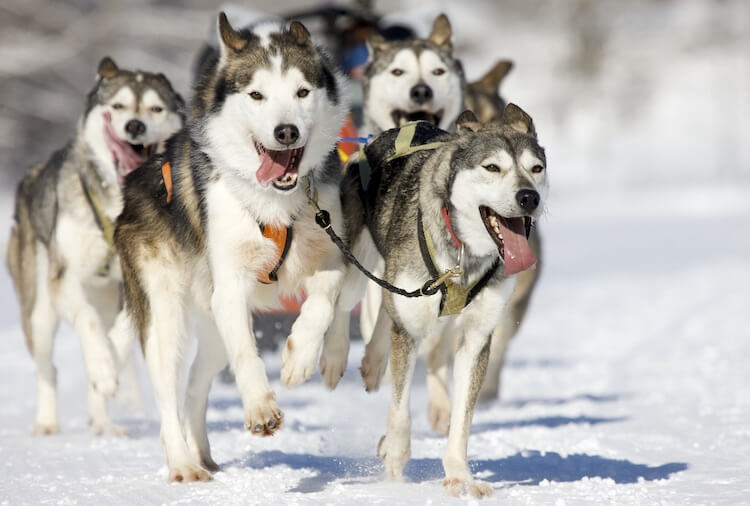 If you still haven’t found any names that really suit your Husky, do not worry.

Here is our list of our best and favorite Husky names that are bound to inspire you.

How about choosing the popular Russian name Anastasia for your glamorous new pet? We love the name Chukchi after the Siberian tribe who originally kept Huskies.

Balto
In 1925 a sled dog named Balto delivered medicine to a diphtheria outbreak in Alaska. This brave pup has his own statue is in Central Park New York

Choosing The Perfect Name for Your Husky 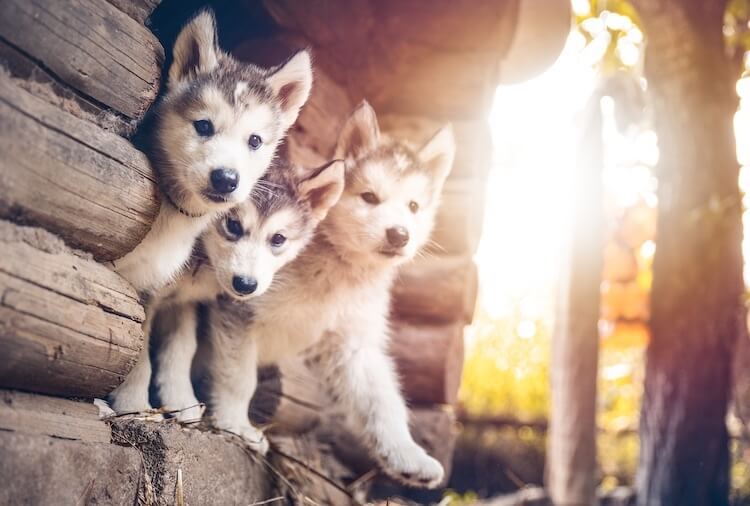 Now that we have shown you all our favorite names, it is time for you to try them out.

Huskies are a spectacular breed that deserves a perfectly fitting name to match their bold personality and gorgeous good looks.

There is no need to be nervous about picking a name that fits because we have our top three tips on choosing the perfect name for your dog.

Tip One – Get Inspired

From our huge list of 275 names, you can see that inspiration can come from anywhere.

Maybe you could choose a name based on the wintery landscapes that are your Husky’s natural habitat, like the name Frost for example?

Or how about taking influence from Siberian culture and choosing a mythological name like Loon?

Sometimes bigger names can take some growing into, or are just too long. A dog’s name shouldn’t be more than two syllables.

Try nicknaming your dog, a name like Florence can be affectionately nicknamed Flo at home. Alaska could be shortened to Lesky.

Make sure that their name suits their personality.

If your puppy is cheeky, a name like Heist would be perfect. Or if they have a more peaceful temperament, try Spirit or Echo.

You can always try shouting out the name in the park to bring the name to life.

We hope we have inspired you with our huge list of fun and creative names. The Siberian Husky names, in particular, are super-cool!

By choosing any of these names your dog is bound to turn heads.

Do you have a Husky? Let us know your favorite names down below. If we have helped you pick a name for your snow dog we would love to hear from you.

So, you are looking for awesome Alaskan dog names for your new four-legged family member? Well, we have got you covered! Choosing an Alaskan name is a great way to make your hound stand out from the doggy crowd. These (Read more… )