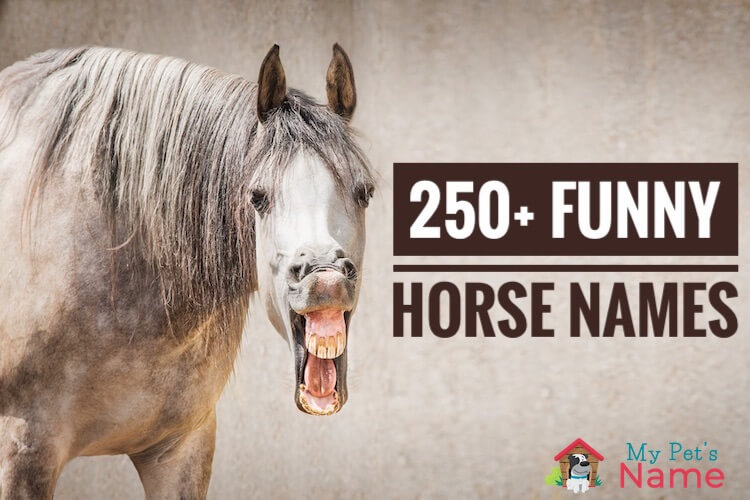 Looking for a funny name for your horse?

Then you’ve come to the right paddock!

Here we have a list of over 250 Funny Horse Names for your perusal, and hopefully for some giggles and laughs too!

Horses can be funny creatures – sometimes they make a face that looks like they’re laughing, when actually they’re just sniffing the air.

Also, sometimes it sounds like a horse is sniggering, but actually they are just breathing air through their nose.

But we start with advice on choosing the best name…

How To Choose the Best Funny Horse Name 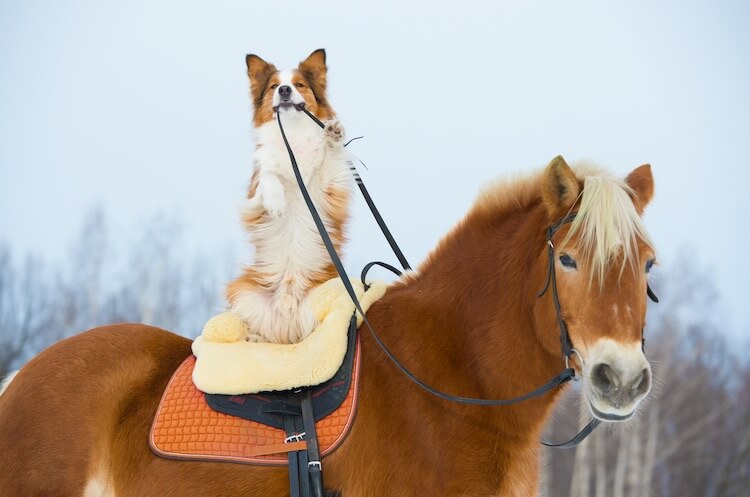 Choosing a name for any pet can be difficult, and whilst we’ve given you hundreds to choose from, sometimes it can be hard to know where to start.

Here are four of tips that might be helpful when picking from funny horse names:

Horses can often live to be 30 years old, (it is reported that one even lived to be 62 in the nineteenth century).

Choosing a horse name that will remain fun, fresh and not at all embarrassing after all those years is sometimes a challenge.

Especially when choosing a funny name, keep in mind whether it will still be funny in years to come, or whether it is only smile-worthy at the current moment in time.

This is even more important if the filly or colt will become a racehorse in the future, as there will be hundreds of people shouting this name loud and clear for all to hear.

Another important thing to remember is that you want your horse’s name to be special.

It certainly cannot have the same name as every other horse in the paddock, and if you are planning on racing your horse, then it should be something that sticks in people’s minds as they are betting.

Pick something memorable and special to you – if it has a distinct meaning then that’s even better. 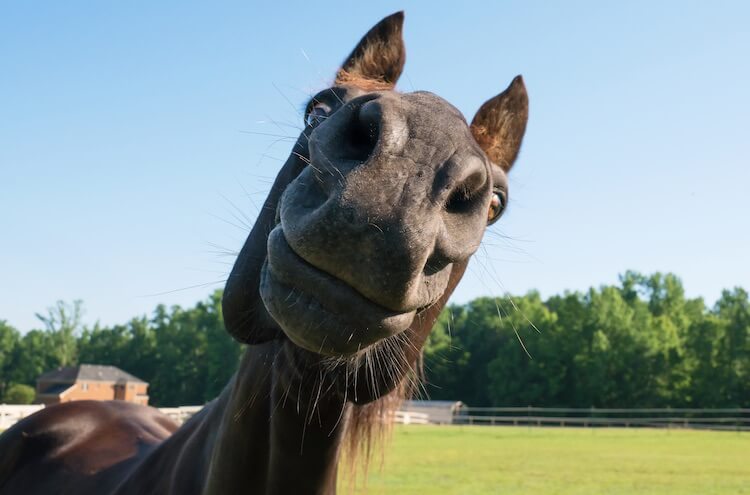 Horses have evolved to become the large, majestic creatures we currently know them as.

The ancestor of the horse may have only been as big as a large dog, and perhaps not something you could use as transport!

Over thousands of years of selective breeding and evolution, horses became larger and closer to the marvellous working animals we know and love today.

May The Horse Be With You
we’ll kick off this list with a Star Wars horse pun. 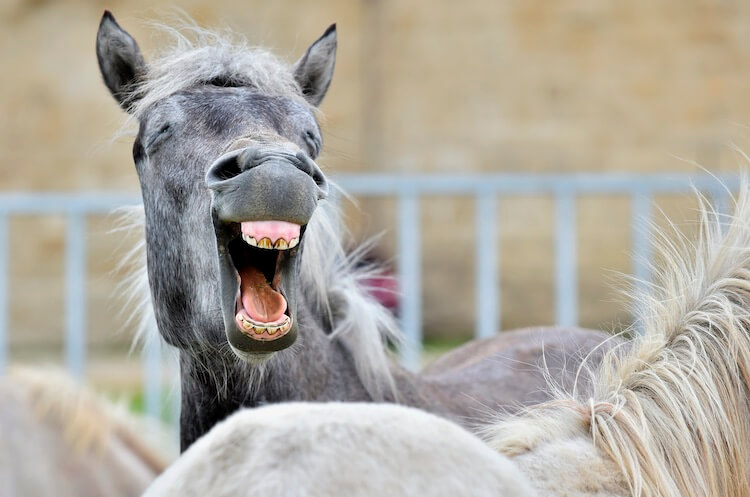 Whilst the grand size of some horses can be quite intimidating, and the force of their kick could do a great deal of damage, horses really are cute creature at heart.

Some fun things you might not have known about horses include:

These majestic creatures are so special and cute, who doesn’t love them?! 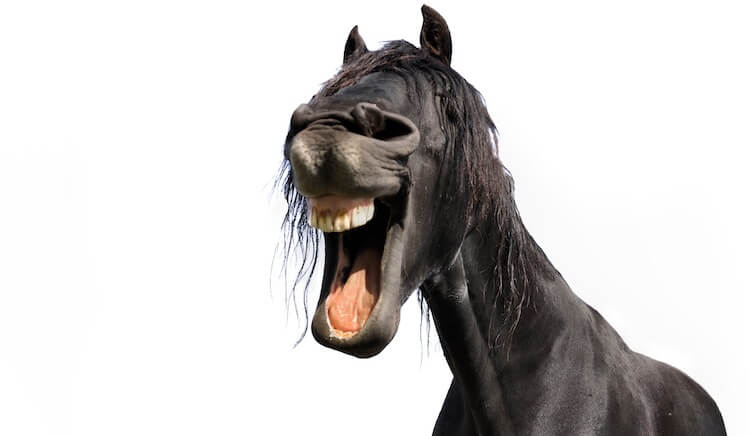 Horses have to rely on having funny horse names because slapstick puns and comedy isn’t their strong suit!

So, the only way for a horse to get the giggles in is to have a hilarious name.

Whilst horses are much larger than humans, there are some things which aren’t as advanced as we might be used to.

For example, their brains are half the size of ours and take up less space in their head than their teeth, so when it comes to great names, we have to help them out! 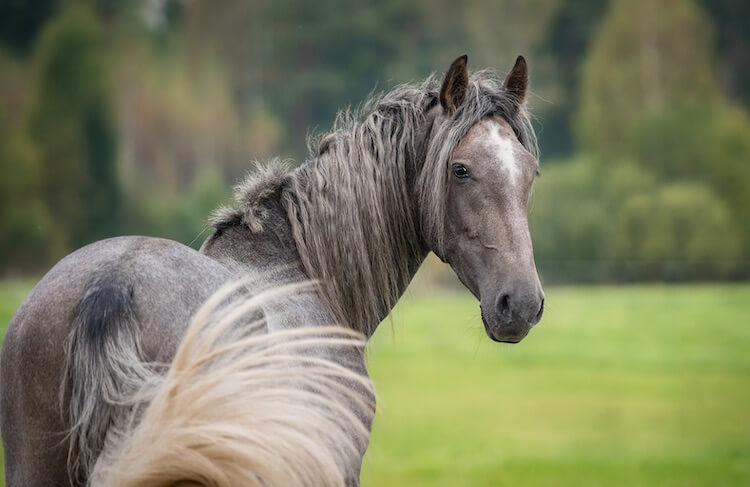 Treats, like apples and carrots, are relished by horses, and so is a funny name!

We’ve created this list of over 30 funny horse names to help out you and your horse.

Some may say a good name is as rare as rocking horse droppings, but hopefully there are a few on this list to suite your stallion or mare.

Maple Stirrup
the best thing to put on your pancakes! 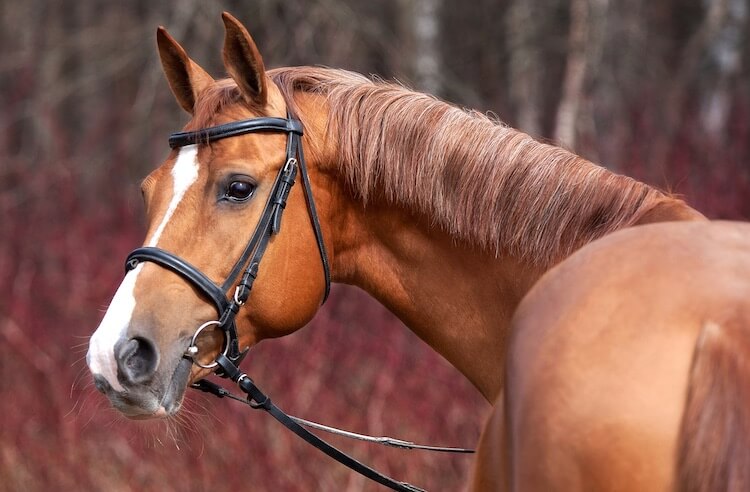 Horses in the wild often live in small herds, and domestic horses often prefer to live with some company.

A horse’s heart is almost the size of a basketball – they have a lot of love to give!

Earn their love and respect by giving them a great name that you can both cherish forever.

You can lead a horse to water, but you can’t make him drink, and we can give you a list of horse names but you have to be the one to choose it. 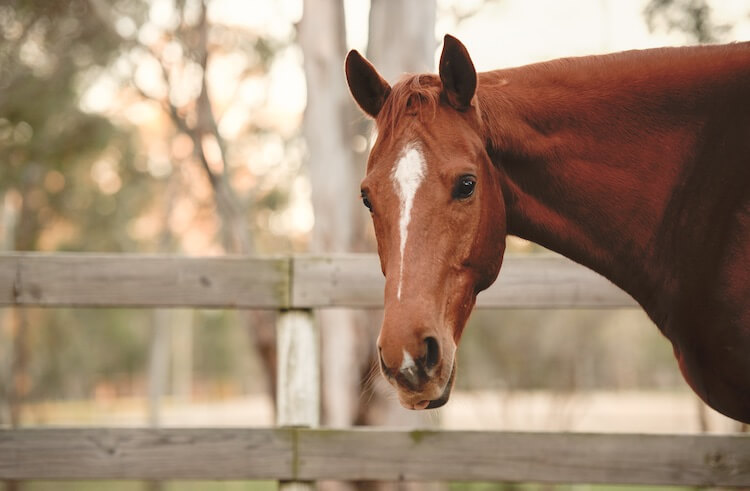 Horses and humans have had a special partnership for hundreds and hundreds of years, and so they can be found in almost every country, and every continent in the world (except Antarctica).

That means there is a lot of horse coverage over the world, and therefore a lot of stallion names that need to be thought of.

There are over 300 different breeds of horse, so this list of funny male horse names should hopefully help you all with names.

We will quit foaling around with all these facts, and let you trot on with this list:

Stable Manners
the act of being polite when you’re eating, probably not used widely by horses

We hope this list of funny horse names made you laugh, or even roll your eyes at the very least!

Make sure to leave us a comment telling us which one was your favorite and tell us any others you may have thought of.

If you know anyone who is as much of a diehard donkey devotee as we are, then be sure to share this list with them.

Also, see what else we have to offer on our site, and we’ll prove we’re more than a one trick pony, or maybe we’re just foal of ourselves.