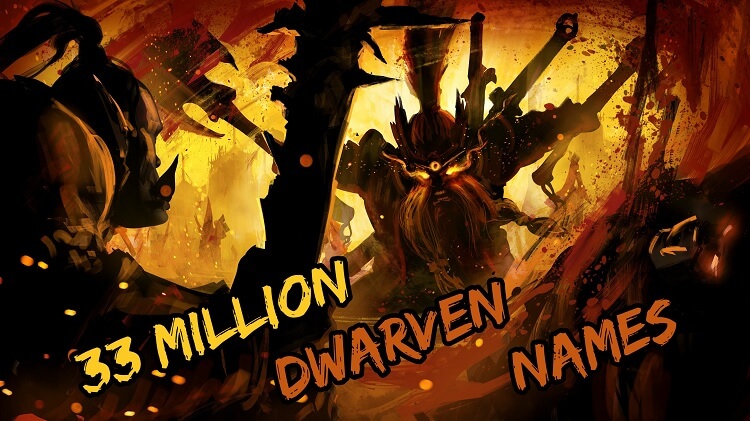 Dwarven names are simple yet powerful things. They’re so often a verbal description of the character, their heritage, or their deeds.

We’ve got the biggest and best list of names for all sorts of dwarves, from Lord of the Rings to Warcraft, Dungeons & Dragons to Pathfinder, Dark Iron to Hill Dwarves, and last names to kingdom names! Just skip to the section you want using the contents or scroll through and enjoy the journey.

Dwarves have mystical talents that fill the gaps in their personalities and their names depict the same. That’s why we have created this page to gather the best dwarf names we could find and make the dwarf name generator to best all others!

If you are a fan of the swarthy race and want to honor their characters, choosing their names for your game characters or pets will be awesome.

You have come to the right place to find many unique and wonderful names for your dwarf.

The short-statured race is always portrayed as mysterious and secretive – always wary of trusting others, and they don’t get friendly quickly. The typical dwarf likes to live underground in mines and caves, and occupy their time by finding and making valuable alloys, often crafting them into maces and axes!

The dwarves are scripted and embedded in the histories of several folklores. Similar to elves, Norse mythology enumerates many origins and areas of their existence around Germany and other Scandinavian countries. An old Norse textbook, Prose Edda, from the 13th century, describes dwarves as small creatures, four of which even hold up the sky.

In the modern era, dwarves predominantly gained fame from Tolkien’s works in the ever-popular Lord of the Rings saga. From his works, Middle-earth is the home of dwarves, also referred to as Khazad in their language, Naugrim, which means “Stunted People,” or Gonnhirrim, which means “Masters of Stone.”

Aule, known as Mahal by dwarves, made Seven Fathers of Dwarves secretly in a hall in Middle-earth. Although Aule created them, he couldn’t give them life, so he decided to destroy them, but Eru saved them and adopted them as his children.

During the first age of dwarves, they were allies with the elves and did trade with them. These dwarves were popular for their craftsmanship and made famous things like the necklace of Nauglamir. But these dwarves are obsessed with gold, and their lust resulted in the rivalry between dwarves and elves.

Durin-II was the second age of the dwarves under the rein of Narvi, a smith, who built the Doors of Durin. The era of Narvi was a prosperous time for dwarves. During the time of Durin-III, he got one of the Dwarven Rings of Power. The ring only served to increase their greed and lust for gold.

Dwarves used to be a united and proud race, but due to some inner conflicts between goblins and orcs, some life struggles and other problems made them move and disperse across the globe.

In the year 1980 of the third age, most dwarves settled in the Grey Mountains for almost 300 years and lived an extraordinary life until the dragons became influential in the North. Then some dwarves fled in the Iron Hills.

In the fourth age of dwarves, the Kingdom under the Mountain was prosperous and strong. Longbeards were left living in the dwarf realm of Erebor after Durin’s race was finished. The longbeards kept the tradition of mining for gems and other valuable metals alive to create weapons. 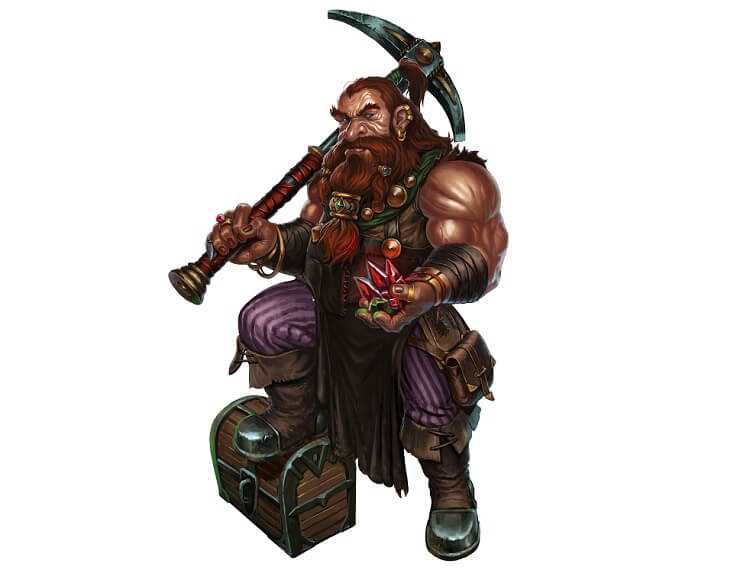 Dwarves have different personalities and forms, but they all share a few common personality traits. They live under the mountains, and their main occupation is mining.

Their appearances are the same, too; they have short-statured bodies and long beards.

Dwarven women have almost identical builds. They are fewer in number compared to dwarven men, are the caretakers, rarely seen outside their halls, but they are also hardy and travel when the need arises.

Here are some of our favorite dwarven names for both males and females.

Dwarf names always have a guttural first name sound and then a clan name. The clan names are of two types: a compound name such as Deepdelver or Silverstone, or a name that sounds dwarven, for instance, Rankarkrak or Torevir.

This name generator has over 10,000 compound last names. For last names that sound dwarven, skip ahead.

Dwarves are courageous, determined, and have stubborn personalities. They don’t trust anyone quickly; instead, they are suspicious and won’t hesitate to harm the person who has bad intentions towards their race.

They won’t put their trust in you until you prove your loyalty. And if you hurt their faith, they will keep that grudge until they die.

DND dwarf names tend to be quite similar to those from Tolkien’s world, however, there are subtle differences as you will see.

Here are some of those distinctive names for males and females.

Lord of the Rings Dwarf Names

The fantasy that includes dwarves may not come true, but the portrayal of dwarves by Tolkien in this best-seller seems accurate enough.

Anyway, here are the dwarf names that are perfect for both male and female characters 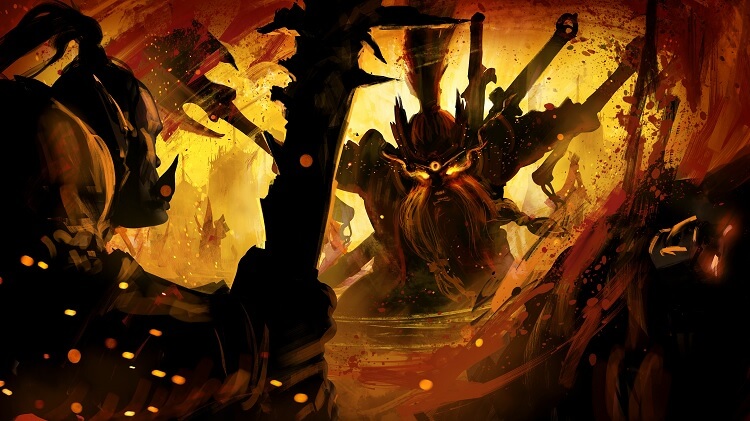 Dwarves are very athletic and strong as they carve their homes deep into the mountains. They are stern characters – living under the mountains facing dangers daily made them this way.

So, after generations of dwarves, nothing changed in their life and personality. Dwarves in Pathfinder reflect the same traits.

Here are some of the best females and male Pathfinder dwarf names.

Dwarves make loyal friends who always protect the weak. Their suspiciousness, stubbornness, and love for gold and worldly things made them fascinating characters.

Along with these traits, dwarves can be very funny too, often with a sardonic and often rude sense of humor.

To fit in with their sense of humor Here are some funny females and males dwarf names.

In WoW, Dark Iron dwarves live under the Blackrock Mountain that Ragnaros, The Firelord, rules. These dwarves are dark-skinned and control the Ironforge.

Here are some great Dark Iron dwarf names for both male and female characters.

Dragon Age dwarves are divided into a caste system – the dwarves inherit their caste from the parent of the same gender.

For example, a daughter inherits the caste of her mother, and a boy inherits his father’s caste. You can only play with only two castes; Casteless or Noble.

Here are some amazing Dragon Age dwarven names for you.


In World of Warcraft, dwarves are strong, mountain-dwelling, and muscular beings who use their skills on stones and metals to make weapons and dig gems.

The dwarf names are given at birth, and they have heavy sounds. Some dwarves have historical names of their magical ancestors because they are very fond of history.

We have known of fantasy dwarves since childhood, having seen and heard about them in stories, TV shows and movies.

It didn’t matter if we’ve loved dwarves or looked down on them (pun intended!); we always looked forward to seeing them in some fantasy plot.

The last names of some of those dwarves have become a part of folklore. We’ve dug them up for you here.

Dwarves are famous for their long beards and short stature, and they are very sensible (though often sort-tempered) in decision-making.

Their clan names represent their collective values and responsibilities. So, here are some names of the clans of dwarf lore for you.

The glory and beauty of the dwarven world are just amazing. If you love Lord of the Rings, World of Warcraft, Elder Scrolls, and The Hobbit, you must love dwarves.

And if you imagine yourself holding an ax in Dragons & Dungeons, you are a legend in the art of loving dwarves.

Here are some classic and fantastic dwarven kingdom names.

Hill dwarves have forgotten their time living in the mountains after they moved in the hills. They also work as craftsmen and love gems, gold, and all other materialistic things.

However, unlike their mountain-d dwarves, however they, but some of them are fortune hunters and traders.

Here are some hill dwarf names for you.

What Treasure Did you Mine Today?

Dwarves are old, strong, and sturdy folk. They know the value of hard work and perseverance; they’re always ready to get their hands dirty for a good cause.

Dwarven names should reflect this strength and wisdom, and that was the purpose of this blog post – to help you select the perfect dwarven name!

What did you come up with in the end? Let us know your favorite name from this huge selection, or add your own that you found inspiration for!