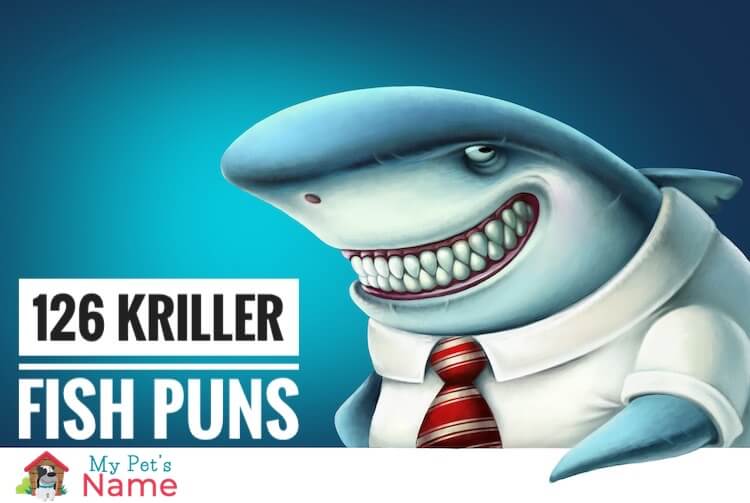 Buoy, do we have some kriller fish puns for you!

If you have been looking for a school of fish puns, then you have come to the right plaice.

We can guarantee these jokes are so funny you’ll be drowning in laughter, we are not squidding around.

We hope these jokes don’t tank!

We will clam down now and let you get swimming along with this list of fish puns, jokes and memes.

How do you tuna fish? Adjust their scales!
What is a fish’s favorite lyric? Never gonna give you up, never gonna let you drown!
Where do fish live? In Finland
Who keeps the ocean clean? A mermaid!
What do fish need to stay healthy? Vitamin Sea! (One of our favorite fish puns!)
How do fish get to hospital? In a clambulance!
What type of vehicle does a fish ride? A go-carp!
What do you call an underwater transformer? Octopus Prime!
What kind of money do fishermen make? Net profits!
Why do fish always know how much they weigh? Because they have their own scales!

What did the fish say when she met someone new? Cod we be friends?
Where do fish go to school? At an a-cod-emy!
Where do fish keep their money? In their octopurses! (One of our favorite fish puns!)
What is a fish’s favorite movie? The Codfather!
What do you say to a fish that is overreacting? Just clam down!
What sits at the bottom of the sea and shivers? A nervous wreck!
What do you call a fake fish? Arti-fish-al!

Have you ever met a shy fish? They are very koi!
Where do little fishes go every morning? To plaice school!
Where do fish wash? In the river basin!
Why did the shop throw the clams away? Because it was past its shell-by-date!
I started reading a book about fish romance yesterday… I’m hooked!
Where do you take fish when they get ill? To the doc-topus!
Why did the fish blush? Because he saw the ocean’s bottom!
Why did the fish love coffee? Because he was addicted to caf-fin!
What do fish do in a crisis? They sea-kelp!
What do you call a fish with no eyes? A fsh!

What did the fish call his worst enemy? His arch nemo-sis!
What did the waiter say when the fish told him the food tasted funny? That’d be the clownfish!
What is the ruler of Russia’s favorite fish? Tsardines!
What is the Pope’s favorite fish? A holy mackerel!
What sea creatures cry the most? Whales!
Who are the best fish in Hollywood? Starfish!
How do you make an octopus laugh? Ten-tickles!

What do you call a fish that drinks too much? A beer-acuda!
What is a fish’s favorite James Bond film? Licence to Krill!
What did the fish say when he heard something funny? You’re kraken me up!
Why do fish live in salt water? Pepper makes them sneeze!
Why did the pufferfish call herself fat? Because she was fishing for compliments!
Why did the fish get his card declined? Because he didn’t have anemone!
Why did the fish get bad grades? It was below sea level!
Where do sick fish go? To see a sturgeon

What do sardine detectives usually say? There’s something fishy going on here!
Why do oysters go to the gym? It’s good for mussel!
How do you get in touch with a fish? Drop them a line!
What is yellow and dangerous? Shark infested custard!
Why did the fish cross the road? To get to the other tide! (One of our favorite fish puns!)
What do you call a fish that needs help with their vocals? Autotuna!
What do you call a fish serial killer? Jack the kipper!
What did the fish say when he moved in to his house? Do you like my new plaice?
What is a fish’s least favorite day of the week? Fry-day
What do fish use when they are going deaf? A herring aid!
What is the scariest thing in the ocean? A serial kriller!
Why will the fisherman never become a boxer? He can only throw hooks!
Why are fish so intelligent? They swim in schools!
I would tell you a joke about fish and herbs but… This isn’t the thyme or plaice!
Why did the fish pause mid-sentence? Because after three seconds he forgot what he was talking about!

What music should you listen to while fishing? Something catchy!
Who is the best musician in the ocean? The bass player!
What happened to the cold jellyfish? It set!
What happened when the fish listened to loud music? It gave him a haddock!
Why did the chef quit his job at the diner? He had bigger fish to fry!
What do you get if you cross an abbot with a mackerel? A monkfish!
What did the ocean say to the sand? Nothing, it just waved.

Where do fish live? In the tunaverse!
How do fish get to school? By octobus!
Where does a whale go to get their teeth fixed? The orca-dontist!
Why don’t oysters share their pearls? Because they’re shellfish!
What do you call a fish in orbit? Trouter space!
How does an octopus go to war? Well-armed!
How do you ride a chariot underwater? With a seahorse!

Why are goldfish orange? Because the water makes them rusty!
What is the most expensive type of fish? A goldfish!
What did the goldfish in a tank say to each other? How do we drive this thing!

What do you call a posh shark? So-fish-sticated!
How does a seaweed advertise a job? Kelp wanted!
What do you call a sea creature who doesn’t like war? A pacifisht!
What type of fish has two knees? A tunee fish!

How do fish find out what is happening in the world? They keep up on the current news!
What do you call someone who is good at catching fish? Annette!
What do sea monsters eat? Fish and ships!
What is a fish’s favorite pair of sunglasses? Ray Bans!
Which fish go to heaven when they die? Angel fish!
Why are fish boots always warm? Because they have electric ‘eels!
Why did the fisherman start doing drugs? Pier pressure!
What sea creature eats its victims two by two? Noah’s shark!
What did the fish tell his son? Keep your friends close and your anemones closer!
How did the fish get into college? A scallopship!
Who takes fish and holds them ransom? Squidnappers!
Why don’t fish like the internet? Because they’re scared of the net!
What do fish do at Christmas? Go coral singing!
What did the sardine say when it saw the submarine? It’s a tin of people!
How did the fish plead in the murder trial? Not gill-ty

What do you call a fish with a messy room? A slobster!
Why wasn’t the shark sad about his breakup? Because there’s plenty more fish in the sea!
How do fish go into business? They start on a small scale!
Why did the lobster blush? Because the sea weed!
Why are fish scared of relationships? They hate intima-sea!
Did you hear about the illiterate fisherman? He got lost at C!
What do you get when you cross a fish and an elephant? Swimming trunks!
What can fly underwater? A bluebottle in a submarine!
What do you call a fish that floats on the water? Bob

What is grouchy and lives alone in the ocean? A hermit crab!
What do fish take to the office? A b-reef-case!
What is the fastest fish? A motor-pike!
Where are most fish found? Between the head and the tail!
Where do fish keep all their money? In a river bank!
Why did the woman make a lot of fish-eye soup? Because it would see her through the week

If you loved any of these jokes, then send this list to salmon else.

On the other hand (or should we say – fin), if you think you cod do better, then let minnow!

Hopefully we aren’t gill-ty of telling too many fish puns.

Tell us in the comments which of these fish jokes were your favorites, and dolphinitely let us know if any made you laugh out loud!

That’s enough of the fish puns for now – we will scale back.